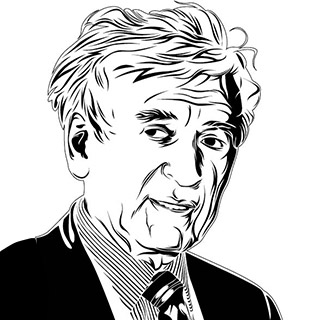 Elie Wiesel was born in 1928 in Sighet, Romania. He was 15 years old when the Nazis deported him and his family to Auschwitz. His mother and younger sister perished, yet his two older sisters survived. His father and he were sent to Buchenwald, where his father died shortly before the camp was liberated in April 1945. Wiesel moved to Paris and had a successful career as a writer and journalist. During his lifetime, Wiesel received 140 honorary degrees from institutions of higher learning worldwide. Wiesel was also a prominent human rights activist and the author of some five dozen books. His best-known book, "Night", is based on his horrific experiences in the Auschwitz, Buna and Buchenwald. 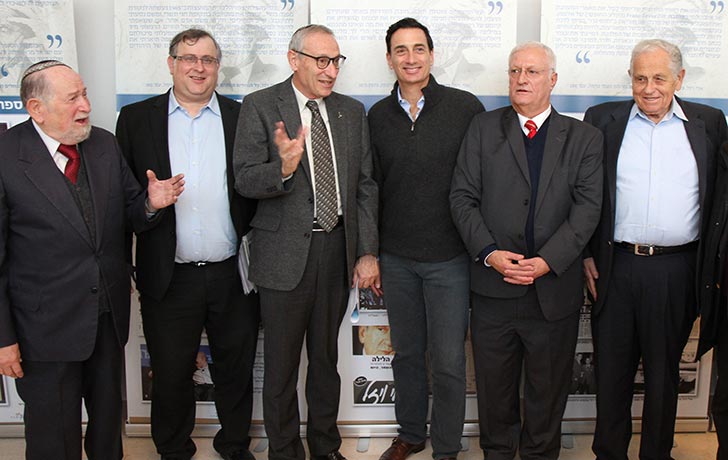 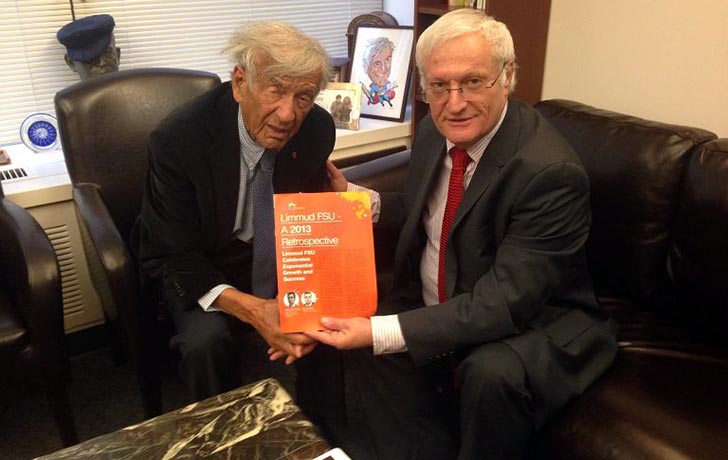 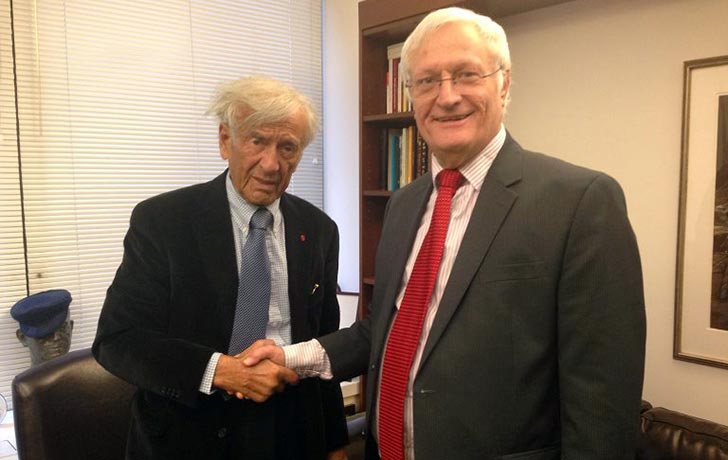 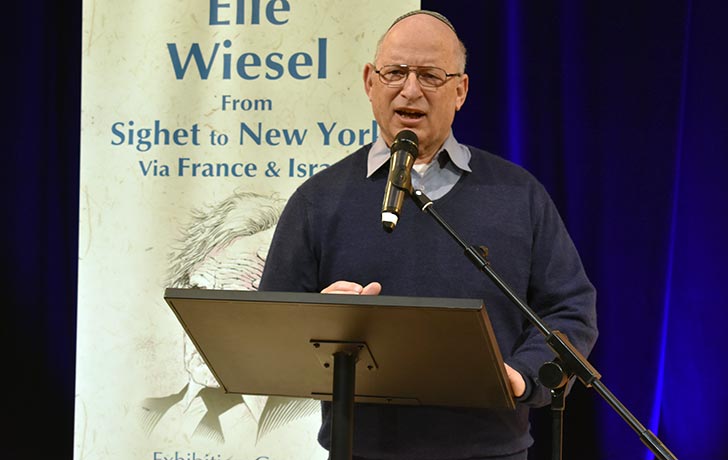 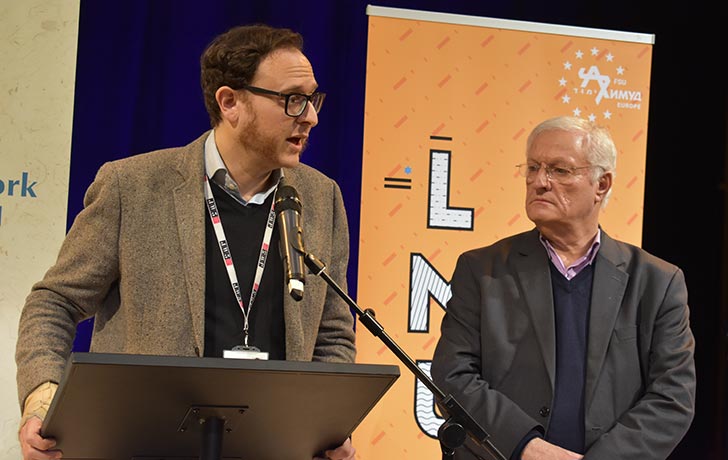 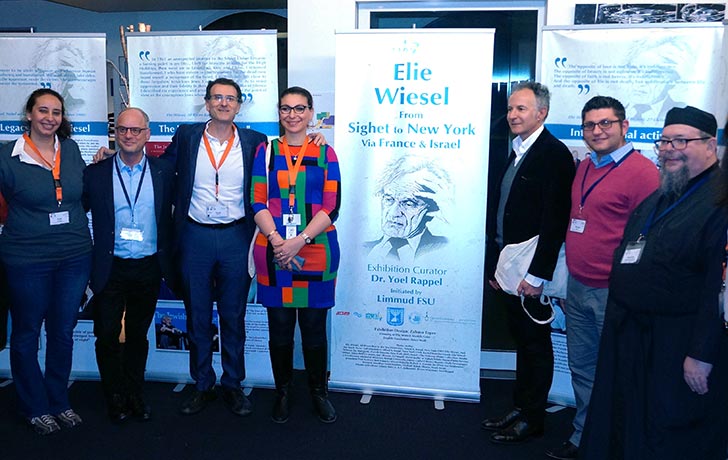 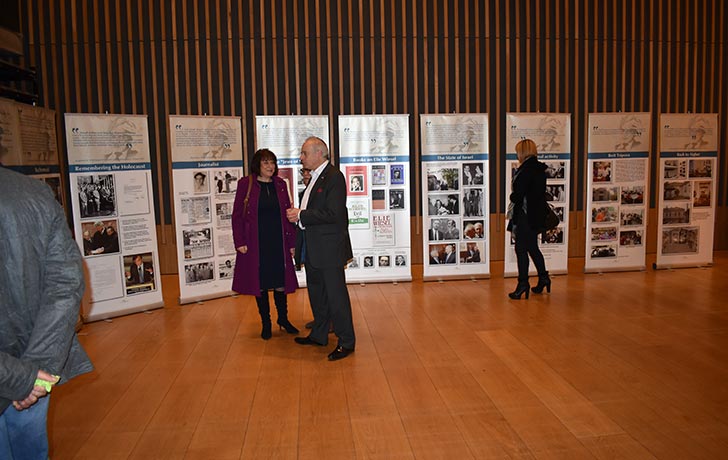 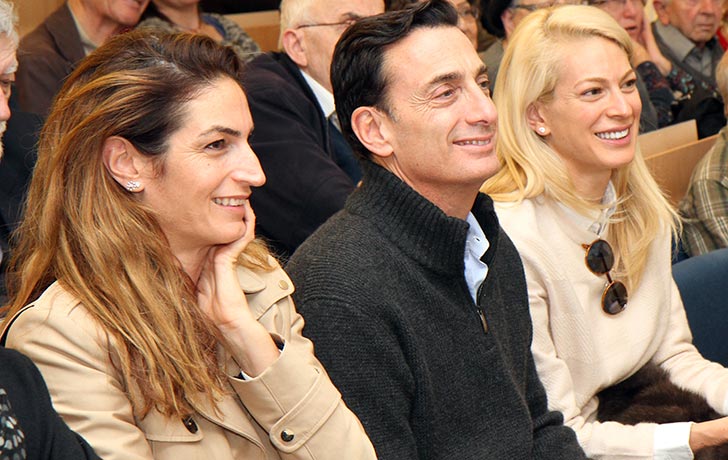 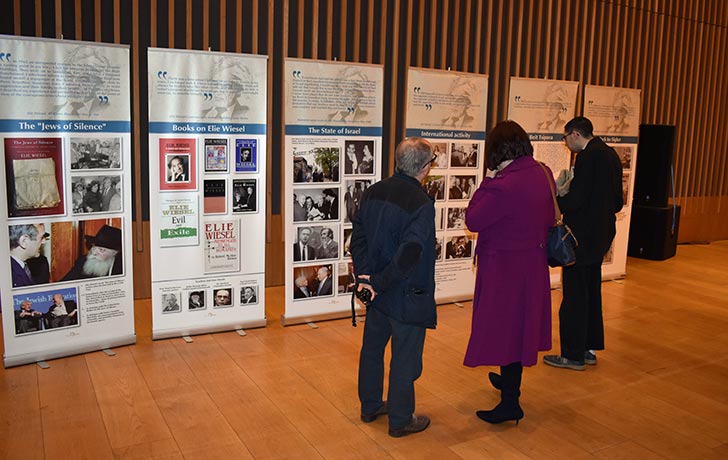 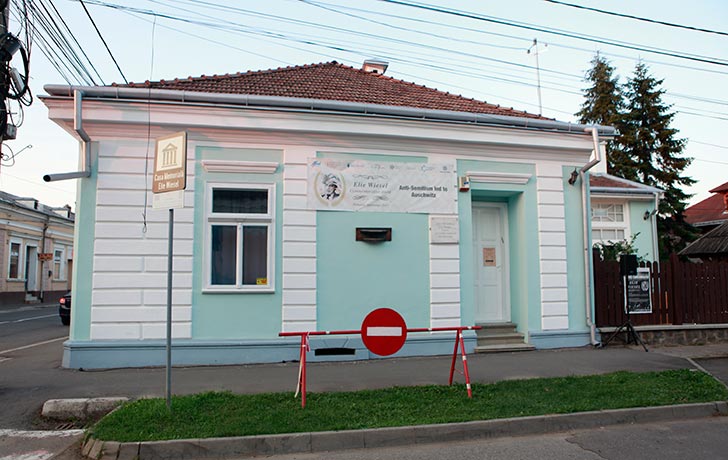 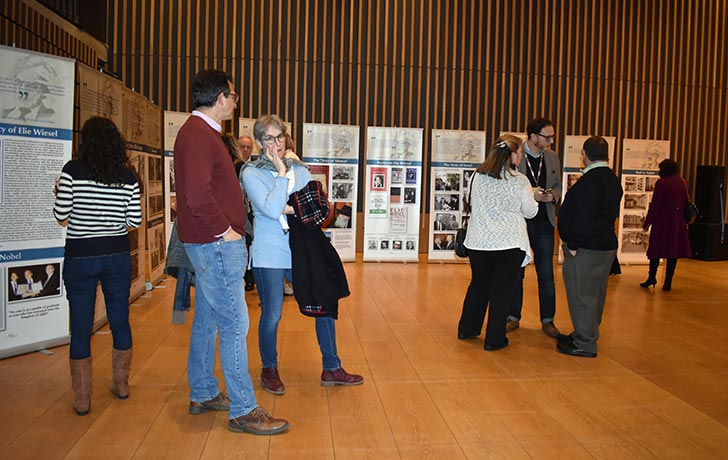 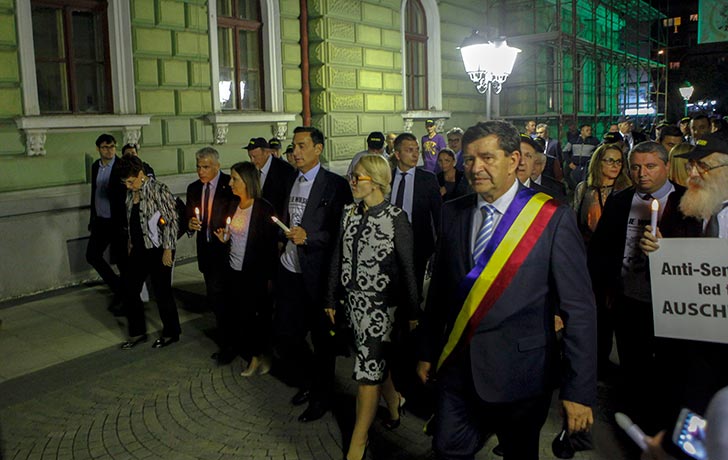 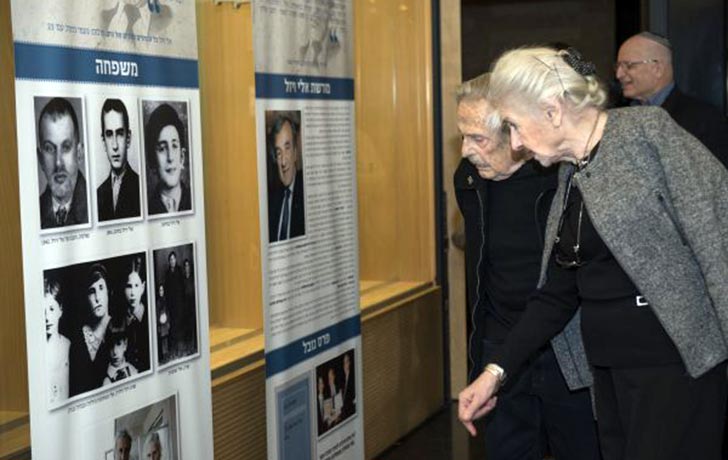 Romanian kids just before the beggining of the commemoration march, next to Elie Wiesel's house 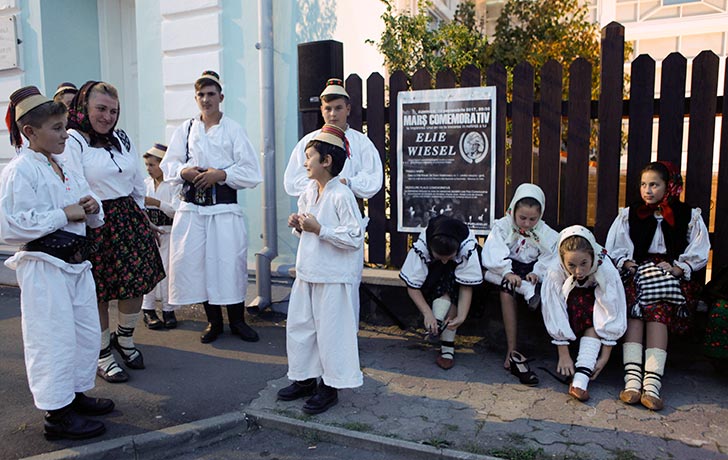 Locals during the commemorative march, Sighet 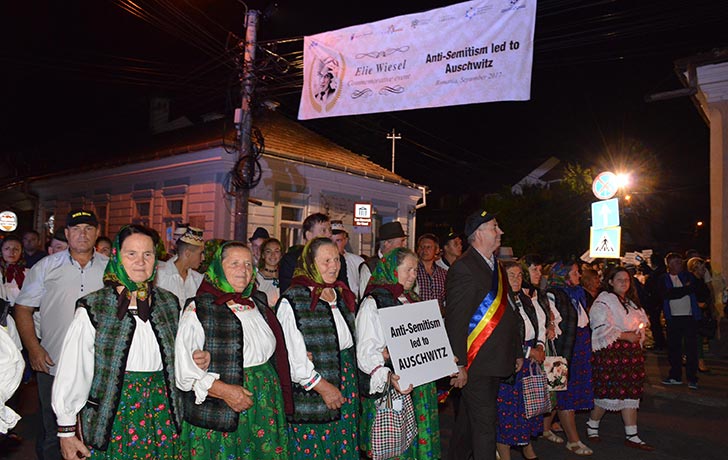 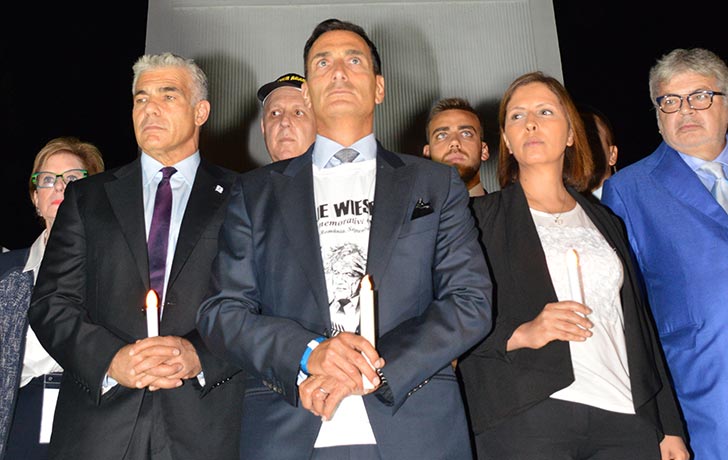 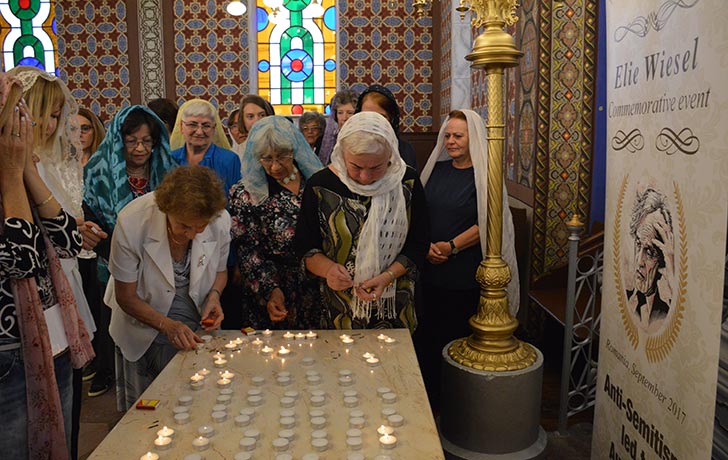 Former Vice President of the Supreme Court in Israel Elyakim Rubinstein during the commemorative march, Sighet 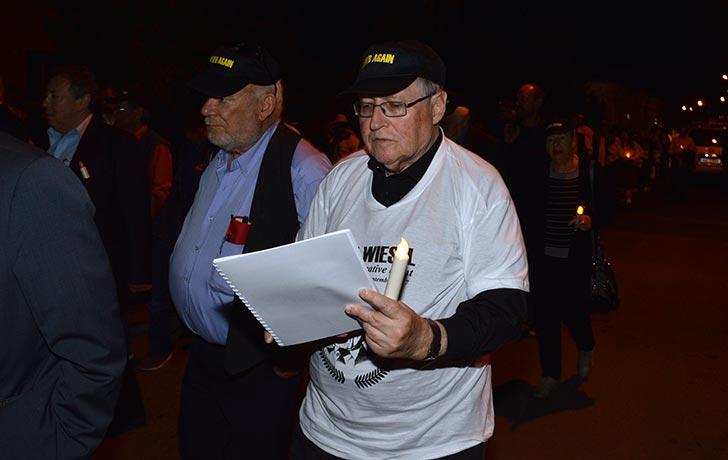 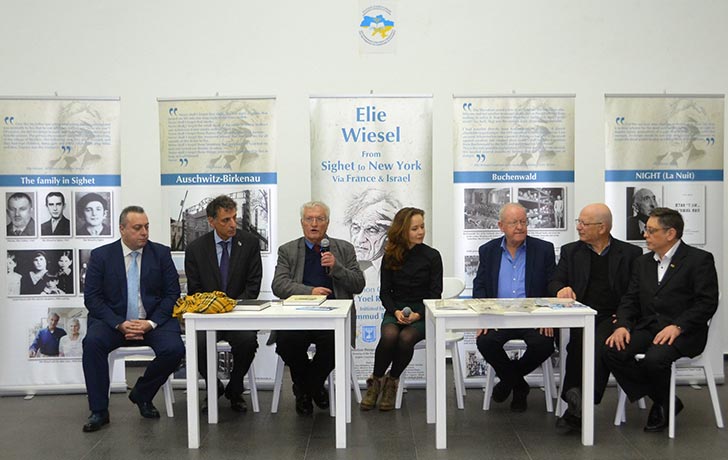 The “Holocaust Cellar” in Sighet

"The house I was raised in is now a museum but to me it will always be uniquely special, eliciting the warmest of memories until the darkness of the kingdom of night befell us" - Elie Wiesel

The first milestone in Limmud FSU commemorating the memory of Elie Wiesel took place in May 19, 2014, when the first public Holocaust education center in Romania opened in the pre-war Wiesel's childhood home, with special events taking place in his hometown of Sighet. The "Holocaust Cellar" became a new feature of the existing Holocaust museum, in the old Jewish Ghetto of Sighet in Maramures County. The Cellar serves since then as a learning center dedicated to the 13,000 local Jewish Holocaust victims.

The opening was initiated by Limmud FSU and sponsored jointly by the Government of Romania, the City of Sighet, the Conference on Jewish Material Claims Against Germany, the Elie Wiesel National Institute for the Study of the Holocaust in Romania, the United States Holocaust Memorial Museum, the Romanian Jewish Federation, and the Caritatea Foundation. Among the events in Sighet was also a concert, memorializing Holocaust victims on Saturday night, after Shabbat.

Speaking by live video stream to event guests, Wiesel said, "To all of you at the opening of the new Holocaust Cellar in my home in my little town of Sighet in the Carpathian Mountains : I so wish that I could be there with you today. The house I was raised in is now a museum but to me it will always be uniquely special, eliciting the warmest of memories until the darkness of the kingdom of night befell us. I hope that your meetings, though melancholy in nature, are fruitful, enriching and full of meaningful learning."

The Elie Wiesel House is today a place of pilgrimage for thousands of visitors interested in its famous namesake, and the city is preparing a walking tour "in the footsteps of Elie Wiesel". As one of the survivors said, no one knows how many Elie Wiesels were lost during the Holocaust. But their memories live on in those who tell and teach their stories, and in Holocaust memorials, museums and education centers such as the one inaugurated in Sighet.

"From Sighet to New York via France and Israel"

"European Jews were exterminated physically by the Nazis; the Jews of the Soviet Union were being destroyed spiritually" - Elie Wiesel

Another event honoring Wiesel’s memory was a special exhibition initiated by Limmud FSU, in partnership with the Shem Olam Institute and the Nativ organization. "Elie Wiesel: from Sighet to New York via France and Israel" was first launched in Moscow in August 2016 and displayed in London, New York, Paris, Kiev, Tel Aviv University, Hebrew University in Jerusalem, and more. Dr. Yoel Rappel, the founder of the Elie Wiesel Archive at Boston University, curated the exhibition.

"When I asked Wiesel how the struggle for Soviet Jewry is more important than the struggle for Holocaust awareness, he replied:" European Jews were exterminated physically by the Nazis; the Jews of the Soviet Union were being destroyed spiritually. The first we were unable to avoid, but we must prevent the second from succeeding,’” said Rappel at the official launch in Moscow.

The exhibition includes dozens of photographs from different milestones in Elie Wiesel’s life, including his birthplace and family in Sighet, Romania; his imprisonment at Auschwitz and subsequent liberation from the Buchenwald concentration camp; his life in France and work as a journalist; his many published books, such as The Fifth Son, The Trial of God, The Jews of Silence, and Night; and his receipt of the Nobel Peace Prize in 1986; as well as his decades of activism on  behalf of Holocaust commemoration and remembrance.

The special procession left Elie Wiesel’s home and continued until it reached the railway station from which Wiesel, his family and Jews from the entire region were sent to the Auschwitz death camp.

This special event took place in September 2017, marking a year after Wiesel’s passing away. More than 1,500 residents of the city of Sigeht, together with senior officials from Israel and abroad and members of the Jewish community in Romania, participated in commemorating march of Elie Wiesel.

The procession marked the culmination of a unique series of special events held in the city in his memory. The events were organized by Limmud FSU and March of the Living in cooperation with the Claims Conference and the World Zionist Organization.

The special procession left Elie Wiesel’s home and continued through the city until it reached the railway station from which Wiesel, his family and Jews from the entire region were sent to the Auschwitz death camp. This was the same route taken by the Jews, including the Wiesel family, in May 1944. During the ceremony, a memorial plaque was unveiled and the name of the train station was changed to ״Elie Wiesel Station״.

The Romanian town of Sighet celebrated the 90th birthday of its most noted citizen, Elie Wiesel

Two months after a grave anti-Semitic incident in town, a special interfaith dialogue took place at Wiesel’s family home in support of the local community and seeking cooperation in the war against violence and anti-Semitism.

Just two months after anti-Semitic graffiti were daubed on the walls of the Wiesel family home in Sighet, which is now a museum to Holocaust Remembrance, a special event in support of the local community’s war against anti-Semitism and violence was held, during which a multi-faith dialogue was held with the participation of members of the three religious communities of Romania.

The event, initiated by Limmud FSU (former Soviet Union) and “March of the Living,” also marked the 90th birthday of the late Eli Wiesel, the noted Nobel peace prize laureate and Holocaust survivor.

At the event, awards were made by the organizing bodies, the Jewish community of Sighet, and the Federation of the Jews of Romania, to the Mayor of Sighet, Horia Vasile Scubli and the local law authorities, who led the campaign against violence and anti-Semitism which resulted in the arrest of the suspected perpetrator a few days after the outrage. Many local citizens participated in the ceremony, including some 100 pupils from local schools.

The multi-faith dialogue was attended by members of the three religious communities in Romania including, among others, Chief rabbi of Romania, Rabbi Rafael Schaeffer, Chief rabbi of Russia, Rabbi Berel Lazar, Aaron G. Frenkel, the President of Limmud FSU; Dr. Joel Rappel, founder of the Eli Wiesel Archives at Boston University; Prof. Aviad Hacohen, Dean of the Sha’arei Mishpat Academic College; Chaim Chesler, Founder of  Limmud FSU; and Aaron Tamir, Deputy Chair of the “March of the Living.” The dialogue was devoted to the fight against hatred, anti-Semitism and violence, as inspired by the legacy of Eli Wiesel.

Berel Lazar, Chief rabbi of Russia, said during the course of the dialogue; “My great-grandfather held a very warm place in his heart for Sighet. He often told me that it was part of a rich nation – one especially rich in spirit. At the same time, the Holocaust is a part of its history and it is therefore important to remember well what happened here and to bear a message for the future – to do everything possible to stop the scourge of anti-Semitism.  What is more important than the individual who daubed the graffiti on the wall of the Wiesel house, is learning who it was that taught him to hate. Hatred leads to murder, murder leads to ruin and in the end, everyone is the loser. Therefore, the most important lesson to be learnt is to strive for peace and amity and to preach understanding and love.”

Chaim Chesler, founder of Limmud FSU said; “The decision to hold today’s event in Sighet was taken after the graffiti incident at the family home of one of the greatest figures in contemporary Jewish history. Our purpose was to launch a heartfelt call that such events will not be repeated –neither here in Sighet nor in any other place in the world.”

Aharon Tamir, deputy chair of the “March of the Living” added; “Behind the cooperation of our two organizations, “March of the Living” and Limmud FSU, lies the belief that if we combine forces, we will be the stronger for it and in that way,  we can strive for a better world. We believe that it is our mission to impart a strong and implacable attitude toward anti-Semitism and Holocaust denial, and there is nothing more symbolic to do so in the very place which nurtured Eli Wiesel.”

This dialogue followed a procession that took place one year ago in Sighet marking the first anniversary of the death of Wiesel, which left from his family home and concluded at the train station, from which the Wiesel family and many Romanian Jews were transported to Auschwitz, and which has been renamed “Gare Elie Wiesel.” Participating in the procession were hundreds of local Sighet citizens, representatives of the Romanian government, public figures from Israel including Minister of Social Equality, Gila Gamliel; MK Yair Lapid; representatives of the “March of the Living” and Limmud FSU and Conference for Material Claims against Germany.